skip to main | skip to sidebar

In addition to the motion chart (reviewed here), Google announced a heat map gadget. It's quite easy to use just like the motion chart. That is, the most difficult part is to collect data for the chart in the right format. 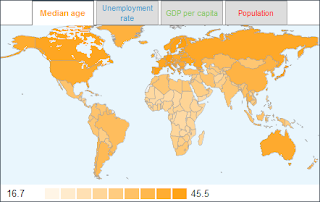 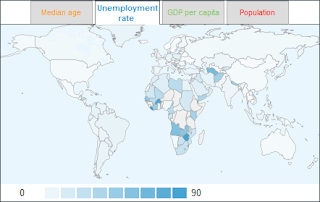 How useful is the heat map concept? Is it a good infographic?
It depends: If your target is to visualize every single variable clearly, the concept works. If your target is to help your audience understand the relationship between variables, then an XY chart works better (such as Google's motion chart--here without the animation): 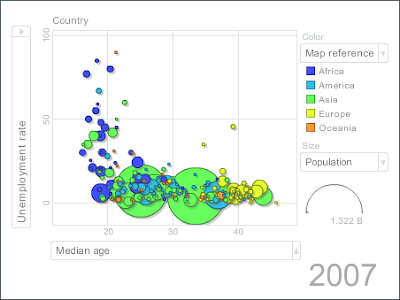 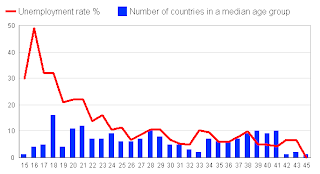 Google just announced a gadget gallery containing one gem for the business intelligence consultants. It's a motion chart, that is, an XY chart with a time dimension (feel free to play with it).

Explanation: The XY chart above displays ten countries according to how much they collect taxes and amount of government spending (bubble size = population, bubble color = unemployment percentage). When you play years between 1970 and 1999, you see countries changing locations. By analyzing the motion it's clear that since 1970 big European countries (UK, Germany, France, Italy, Spain) have adopted policies that make them more alike (bubbles moving near each other from starting positions) while Sweden all the time stands out with high taxes and government spending. Japan seems to be the other extreme with low taxes and government spending. Between 1993 and 1997 Spain turns red with a high unemployment rate (over 20%).

Of course, the motion chart concept is someting we have been waiting for ever since Google bought GapMinder. Now Google gives it for use for everybody. For example, you can load the motion chart with the products of your company and see their profiles changing over time.

Here are the steps (I made) to publish the motion chart...

1. I searched data from web with keywords "time series data". The macroeconomic data I found here. I decided to limit my test in ten countries. I collected the text data into spreadsheet. One hour.

2. The data was not in the right format for the motion chart (see example here). I used several methods to clear and pivot the data (not only in spreadsheet) until I was ready. One hour.

3. I copy-pasted the data into a Google spreadsheet document (yes, you must start using Google Docs to create and publish your motion chart). I inserted the motion chart gadget and it worked immediately. I still changed the format several times, because I needed (wanted) to learn how motion chart uses spreadsheet data. One hour.

4. From the top-right gadget menu, I chose Publish Gadget, and it gave me html to put into a web page. One minute.

Final thoughts... I'm not completely satisfied with the fact that in order to use the motion chart Google will host my (perhaps confidential) data. Nevertheless I'm going to explore the motion chart concept with my customers in the future, I'm sure.
Posted by Janne Pyykkö at 4:49 PM 12 comments:

Google Chart API--why it's not important in BI?

Just for curiosity I took a look at Google Chart API. Here are two sample charts I created with it. 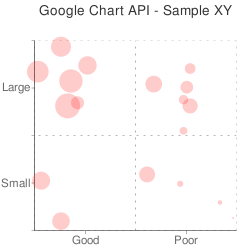 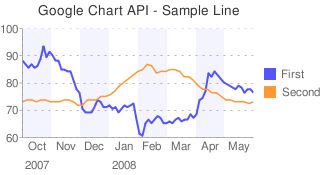 Nice charts. As the data and axes are controlled separately, it's possible to compose:

As a BI consultant, should I be interested in Google Charts?

- No. Google Chart API is a programmer tool to build larger systems.

OK. When such a larger system appears, should I be interested then?

- No again. All Google Charts are by nature static pictures (PNG files), without any means to add user interaction.

For example, if you move the mouse cursor onto a symbol (or click the symbol) in the XY chart above (or onto the line chart), nothing happens. Simply said there's no mechanism to display what the symbols represent (or what is the exact value displayed in the line chart). It's not possible to program drilling-down either. And all these features are essential in business intelligence...

Anyway, I had fun going through the Google Chart API. If you have a mind of a programmer, it's worth studying. Here are the urls which I used to create the XY chart and the line chart (broken into several lines for clarity).

Adding value to sales data: willingness to use service again

Among other things this blog is about saving advantageous solutions for future use. After writing the previous posting Viewing sales data by using XY charts, it came into my mind to compose a more general solution how to add value to your sales data.

Let's start with the following sales table (same as before, products A-Z, etc):

By using the salesdata table, we create a new table salesdata_prod_cust_pair that summarizes sales for each product-customer pair within a season.

The following SQL populates the table:

As you can see:

OK. This was only the first part. By using the new salesdata_prod_cust_pair table, you can write in SQL:

.. and get the following results: 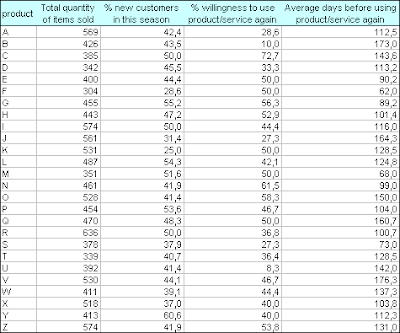 See the last two columns! For example the willingness to use product/service again is an excellent indicator to monitor how much your customers trust your products.

By using an XY chart you can visualize the data: 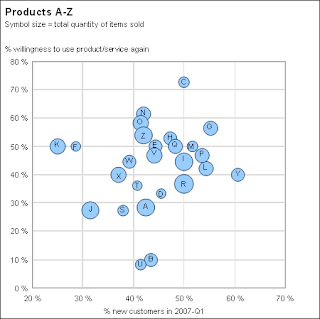 I think I'm done with the sales data for now. Next time, something else.

An XY chart (scatter plot) can express more than a typical bar or line chart. Here's an example how you can utilize typical sales data and create two interesting XY charts that help your decision making processes.

Suppose you have a typical sales table: 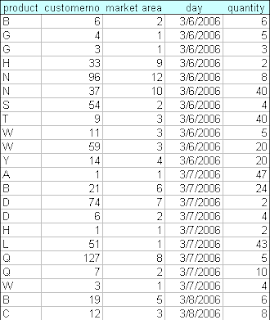 By using the data, you usually create charts like this: 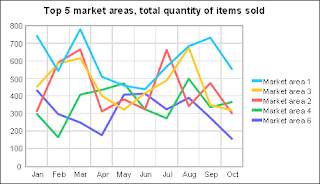 .. and for sure this chart is informative in many ways.

Now suppose you are interested in knowing more about products and market areas. For example: what is the average quantity of items sold in this season (Y), and how many of the customers bought the product for the first time (X).

You can get the data by using the two following SQL queries (this season = 2007): 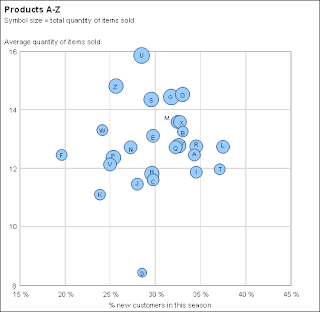 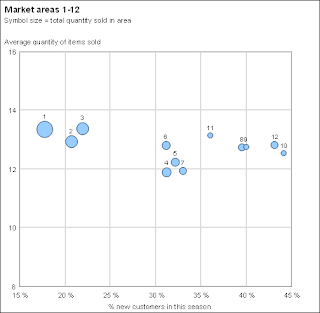 All this is interesting -- no less so because the basic line chart cannot express this knowledge.

Nevertheless it must be said that these charts don't yet tell anything about the prospects in different market areas. Adding facts about market area size (for each product) would help your decision making where to target your marketing in the next season.

Therefore, don't be satisfied with line and bar charts, if you can improve your decision making by using XY...

Janne Pyykkö
Espoo, Finland
Having 16 years experience of developing an OLAP tool Voyant, I'm ready to broaden my view to other BI softwares.

This is a personal blog. The opinions expressed here represent my own and not those of my employer.